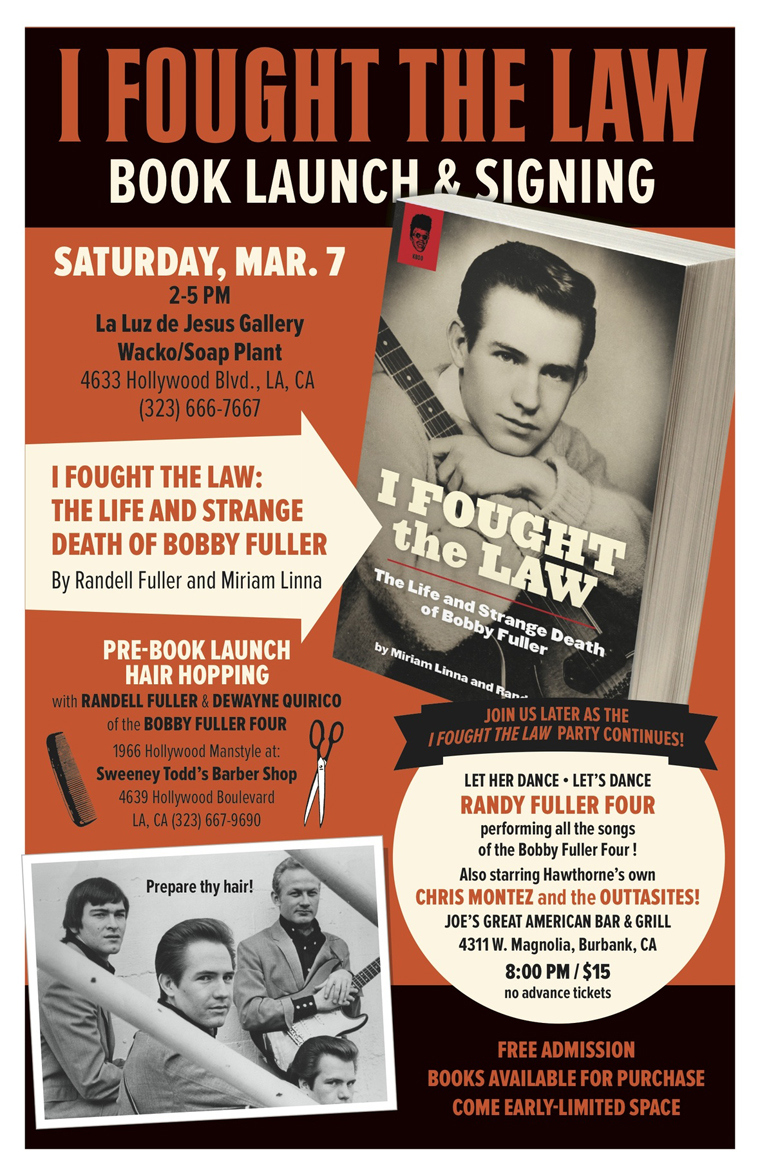 Posted at 13:08h in Upcoming Events by Staff

I Fought the Law: The Life and Strange Death of Bobby FullerBook Release & Signing Party

The Los Angeles book launch for I Fought the Law: The Life and Strange Death of Bobby Fuller is set for March 7 at La Luz De Jesus Gallery at the fabulous Soap Plant– one month after the BF4 recording of I Fought the Law is inducted into the Grammy Hall Of Fame on February 7.

KICKS BOOKS CRACKS ONE OF MUSIC’S MOST TRAGIC MYSTERIES WITH ‘I FOUGHT THE LAW: THE LIFE AND STRANGE DEATH OF BOBBY FULLER BY MIRIAM LINNA AND RANDELL FULLER (1942-1966)

…on July 18, 1966, at the age of 23 and with a Top 10 hit on the charts, Bobby Fuller was found dead in the front seat of a car doused in gasoline outside his Hollywood apartment. ‘I Fought The Law,’ named after Fuller’s most iconic recording, is the first ever authorized biography of the ill-fated 1960’s Texas music legend. Norton Records/Kicks Books co-founder and Fuller biographer Miriam Linna, has teamed up with Bobby’s brother and bandmate Randell, to reveal the true story of the short life and strange death of Bobby Fuller.

Randell opens up for the first time about growing up with Bobby– from their idyllic Southwestern childhood in Texas, New Mexico, and Utah, to their teen-age years in the burgeoning El Paso music scene, to the Hollywood helter skelter that would claim Bobby’s life. His death remains a mystery, with much conjecture and misinformation on al fronts.

Bobby Fuller was immersed in all aspects of music—writing, performing, recording, and marketing. He first appeared on record in 1958, at the age of fifteen. While still in his teens, he started his own band and record company, and built a home studio with Randell. By the age of 21, he owned his own teen club in El Paso, with his group, the Fanatics, as the house band. The club closed in ’64, and the group lit out for Los Angeles. They were soon recording for the Mustang label as the Bobby Fuller Four. Enormously popular locally, the BFF landed two singles in the Billboard charts – 1965’s “Let Her Dance,” and the iconic “I Fought The Law” in 1966, which vaulted them to the national and international stage.

Though recorded by everyone from the Crickets on down, Bobby Fuller’s version of “I Fought The Law” remains definitive version. Next month it will be inducted into the GRAMMY Hall of Fame.

Miriam Linna has written extensively about Bobby Fuller, particularly for several collections of his recordings, which appear on New York’s Norton Records label. She collects and catalogs true crime magazines, paperback books and pulps, and edits Bad Seed, a compendium of teen-age crime in pop culture from 1949-1959. She has written about music and crime since 1975. Her articles have appeared in several publications including Crime Beat, the Guardian, Spin, Seventeen, Loops Journal, and Kicks.

Randell Fuller is Bobby Fuller’s brother and band mate. Only two years apart in age, they were often mistaken for twins as children. As bass player for the Bobby Fuller Four, and the El Paso Fanatics before that, Randell and Bobby were inseparable. The gruesome death of his brother sent Randell into a tailspin from which it would take him years to recover. He has rarely given interviews, and only now opens up to reveal untold information.

A book launch with the authors in Los Angeles is set for March 7 at La Luz De Jesus Gallery. Hollywood denizen DJ Howie Pyro is set for presentation, and a pre-book blast hair event is scheduled at Sweeney Todd’s Barber Shop two doors down from La Luz De Jesus Gallery. Join the authors (and make an appointment!) as the expert hair hoppers at the hair emporium perform maneuvers that will result in Sebring-esque 60’s joys such as the “Exeter”, the “Mustang”, and the “Eastwood”, suitable for style conscious individuals of all persuasions. Exeter perfume will be demonstrated as a hair freshener, and will be available exclusively at the shop.

Randell Fuller and original Bobby Fuller Four drummer Dewayne Quirico will perform songs of the Bobby Fuller Four that night as their “Let Her Dance” goes head to head and toe to toe with “Let’s Dance”, as Chris Montez also performs a rocking’ set, with Deke Dickerson as band leader. Deke and Howie Pyro are scheduled to DJ with mid sixties floor fillers.

I Fought the Law: The Life and Strange Death of Bobby Fuller as told through the eyes of his brother Randy.

Fuller’s teenage home garage recordings are pure, wild and heartstopping anthems that pushed him into the Hollywood big leagues where he was no longer in control of his music and career. The title song, plus Let Her Dance, Another Sad And Lonely Night, Shakedown and so many others are all world-class rock and roll favorites. He wrote the songs, recorded them in a garage studio that he built with Randy, released them on his own record labels, promoted and supported them himself, and opened his own teenage night club in El Paso. He was the king of the scene, and soon found himself bound for the coast where he wanted to bring his vision to a larger audience. This book tells the story of his early years, through the Texas teen days, and into the last eighteen months of his life when his career skyrocketed into the music charts, television and the movies, and he became an unwilling pawn to powerbrokers with little regard for his talent. He was found dead in a car, doused in gasoline, in July of 1966.

By Miriam Linna and Randell Fuller

EXETER FRAGRANCE One precocious avoirdupois half ounce, equal parts Texas glory, Hollywood glitz and NYC sizzle. Ltd promotional fragrance. Bodacious allure for both he and she, not for the timid! Named for Bobby’s own Texas label, packaged in signature Kicks Perfume gift box with a record spindle, of course.

Only books and records purchased here will qualify for signing.
Reserve your signed copies today!
Contact the book store for purchase information.(323)663-0122 or sales@soapplant.com or click here to purchase your copy online.