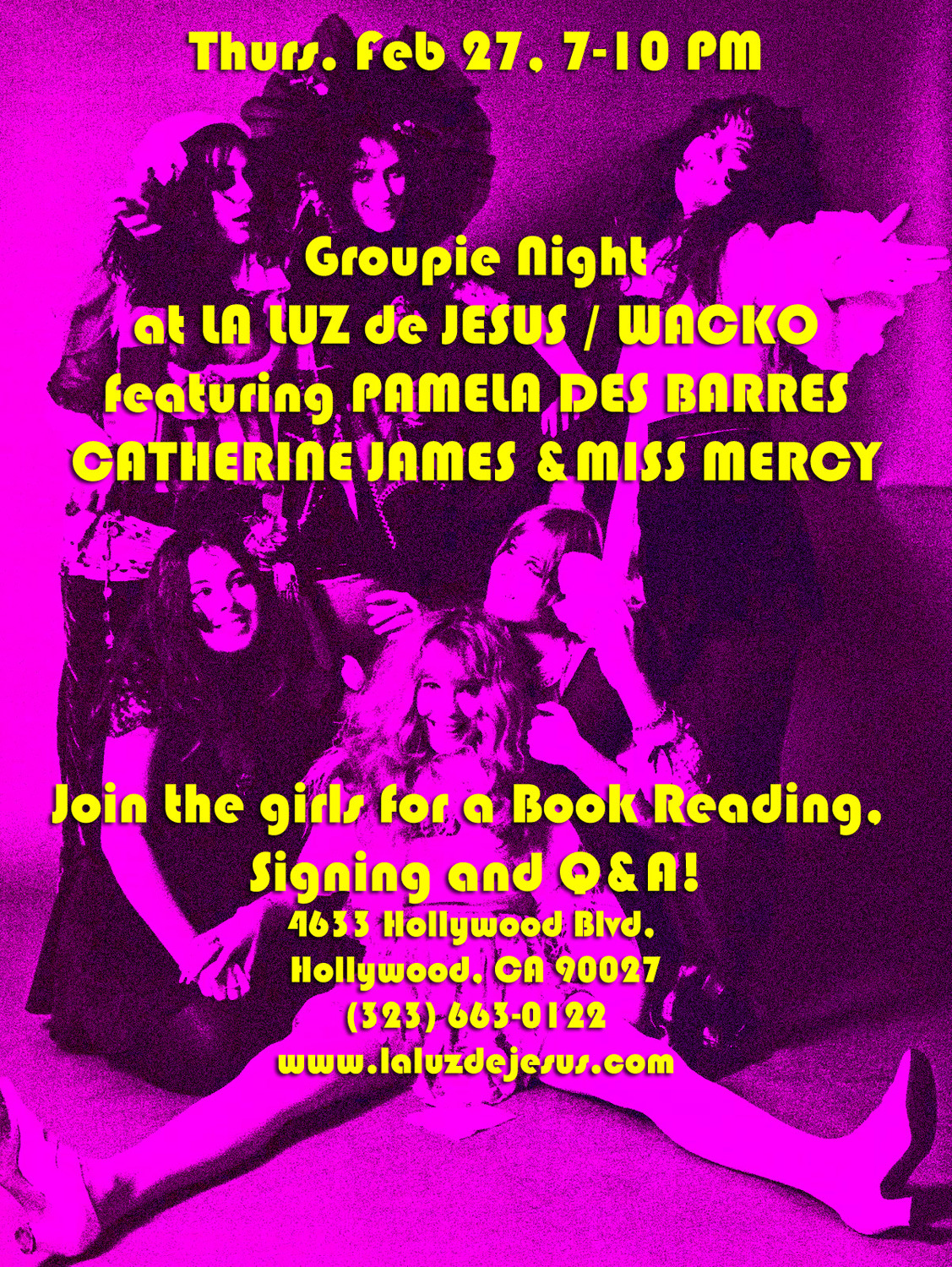 18 Feb Groupie Night with the G.T.O.s

Posted at 19:53h in Past Events by Staff

Come join the fun with Pamela Des Barres and Miss Mercy of the legendary Frank Zappa produced Hollywood Groupie Group, The GTOs, along with muse Catherine James who will be appearing at La Luz de Jesus / Wacko on Thursday, February 27, 2014 to read and sign books, chat with fans and share photos of their wild hippie days!

Heading up the trio, Pamela des Barres, author of I’m with the Band: Confessions of a Groupie, Take Another Little Piece of My Heart, Let’s Spend The Night Together: Backstage Secrets of Rock Muses and Supergroupies, and Rock Bottom: Dark Moments in Music Babylon will kick off the readings, from her I’m with the Band book. Catherine James will read from Dandelion; Memoir of a Free Spirit and Miss Mercy will also read from Pamela’s book. Pamela will also read some of her teen poems and the trio will close out the event with a Q&A and book signing!

PAMELA DES BARRES
Queen of the groupies, best-selling author, renowned journalist, screenwriter, Internet columnist, rock & roll aficionado, writing teacher, muse… As the spokesperson for the most sexually liberated generation of females in history, Pamela Des Barres exemplifies the exuberance of the 1960s hippie subculture, plus an unexpected soupçon of old-fashioned Mama-Knows-Best wisdom. And she has been writing since Santa put a diary in her Christmas stocking at age eight.

As a member of rock visionary Frank Zappa’s most tender-hearted musical creation, the performance art/groupie-group, The GTOs, (Girls Together Outrageously) Miss Pamela and her flamboyant teenage sisters wrote and released their cult-classic album, “Permanent Damage” in 1969. Being in her own rock band put her on a lofty pedestal, and she found herself in the presence of some of her most juicy idols, including Mick Jagger, Jimmy Page, Jim Morrison and Keith Moon. Whether in love or in awe, she explored each relationship with unjaded adoration and an innocent sexual openness few could resist. These liaisons and subsequent fiery diary entries eventually led to her first book, “I’m With the Band,” published in 1987, a best-selling memoir that would set the standard for sexual honesty in women’s writing.

The prolific Miss Pamela followed with four more books: “Take Another Little Piece of My Heart,” “Rock Bottom,” and in collaboration with rock pioneers Dick & Dee Dee, “The Rock and Roll Cookbook.” In 2008 a compendium of interviews with groupies and rock musicians aptly named, “Let’s Spend The Night Together,” was published and glowingly reviewed.

Pamela has written hundreds of articles for such diverse publications as Cosmopolitan, The New York Times, Rolling Stone, Details, L.A. Weekly, Jane and Los Angeles Magazine, she has written copious liner notes, interviewed a multitude of rock luminaries, and her E! On-Line music column ran for five years. Most recently, she wrote a column for Rolling Stone Italy (her books are very popular in Italia) for over 2 years.

Pamela tours the country, speaking at colleges and poetry readings, she teaches women’s writing workshops all over the U.S. and is currently working on her sixth book, “Femoir”, a workbook to help women tell the story only they could tell.

MISS MERCY
Miss Mercy left home at age 15, filed for her own emancipation and became a ward of the court. She then moved in the Haight-Ashbury district of San Francisco, California where some of her earliest neighbors included members of the Grateful Dead, Janis Joplin, and even a young Charles Manson. Eventually, Miss Mercy and Pamela des Barres heard from peers that Los Angeles was the mecca for meeting entertainers and especially rock & roll musicians, and moved south, immersing themselves into the local scene. One of Miss Pamela’s childhood friends, Captain Beefheart, took the girls to a large castle-like compound in Laurel Canyon, where they became part of The Laurel Canyon Dance Company with Vito Paulekas and Carl Franzoni. There she became a member of the GTO’s.

Soon after the breakup of the GTO’s she became romantically involved with blues guitar prodigy Shuggie Otis, the son of rhythm & blues pioneer Johnny Otis. They married and had a son, Lucky Otis, who became a world-renowned multi-instrumentalist / musician in the likeness of his father and grandfather. A few years later, Miss Mercy and Shuggie divorced. For the next 15 to 20 years she moved around northern and southern California, living a life of heavy drug use and sporadic public appearances. Miss Mercy remarried in 1991 and in 2000 divorced her second husband and quit all hard drugs and cigarettes. She has been clean and sober ever since. Miss Mercy currently resides in downtown Los Angeles and works for a thrift store in Hollywood. A chapter of “I’m With the Band”, entitled “Miss Mercy’s Blues”, is an account of her life. She has worked for five decades in magazines, books, radio and television, and contributing to award-winning feature-length documentaries. She had a ten-minute segment dedicated to her life in the cult hit The Mayor Of Sunset Strip starring alternative rock pioneer KROQ disc jockey Rodney Bingenheimer, who is a close longtime friend of the GTO’s. Miss Mercy and Miss Pamela remain close friends. As of 2011, Miss Mercy is working closely with an author / biographer to help document her life.

CATHERINE JAMES
Catherine James’s relationship with her young, beautiful, and wickedly irresponsible mother informed her Los Angeles childhood. Neglected—she would be strapped to a chair at night while her mother cavorted on the Sunset Strip—Catherine longed not for normalcy, but just for the chance to get away. To get away to her beloved grandmother Mimi or to her glamorous Aunt Claire’s, a Hollywood version of Grey Gardens stuff with racks of the former beauty queen’s 1930s ball gowns and memories of grand parties with Claire’s ex-husband, Busby Berkeley, to get away to her father, a dashing race-car driver who had been out of her life almost since the day she was born, and to get away to school, where she would at least be taken care of. Instead, Catherine was abandoned by her furious mother to become a ward of the state before she reached her teens.

It wasn’t until a chance meeting with a very young Bob Dylan that Catherine was inspired to make her escape—as a real runaway, breaking out of the California orphanage with only one goal: to get to Greenwich Village in New York.

Dandelion then becomes a look through the eye of a needle, as Catherine experiments with Eric Clapton; a peek through the viewfinder of a Polaroid, as Catherine is taken up by the beautiful people in Andy Warhol’s Factory; and a glimpse through a haze of smoke, as she begins romances with rockers like Jackson Browne and Jimmy Page.

While raising her son, whose father was Denny Laine of the Moody Blues, Catherine finally returns to her West Coast roots, reconnects with her family, and discovers that her mother hasn’t changed but her father has: He’s become a heartbreakingly garish transsexual.

Moving and shocking by turns, Dandelion is a completely different view of a celebrated pop culture scene and of a dramatic mother-daughter relationship.

THE BOOKS:
Pamela Des Barres
“I’m with the Band: Confessions of a Groupie”
“Take Another Little Piece of My Heart”
“Let’s Spend The Night Together: Backstage Secrets of Rock Muses and Supergroupies”
“Rock Bottom: Dark Moments in Music Babylon”
Catherine James
“Dandelion; Memoir Of A Free Spirit”

If you cannot attend the event and would like a signed book, contact Soap Plant / Wacko at (323) 663-0122 or sales@soapplant.com